On Saturday, 23rd April Pennine Community Credit Union’s (PCCU) nearest and dearest joined together at Turf Moor, Burnley in celebration of four decades of operation where a four course dinner and entertainment were provided. 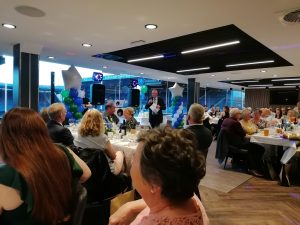 PCCU President, Gerard Spain opened the celebration with a speech, reflecting on the growth of the credit union and thanking both volunteers and staff that have been involved.

“Since PCCU began, with just 15 members and a collection of £75 in 1982, PCCU has grown substantially. Now with a membership of 14,000 account holders, collective savings of £14.3m and a loan book of £8.7m PCCU can proudly say they have helped tens of thousands of local people access well needed ethical financial services. Without all of the wonderful team of people over the years both volunteers and staff who have worked relentlessly, we would not be where we are today and have helped as many people as we have. During the last year alone, PCCU has saved the community £19m in interest in comparison to one of the leading high interest lenders.”

The event was a great opportunity for guests to reunite with their previous colleagues and reflect on PCCU’s journey. Lots shared memories of working for PCCU and the milestones that were achieved during their years involved.

Overall the event was a huge success in commemorating this special day in the credit union’s history. PCCU now looks forward to the future and the prospect of reaching further milestones. 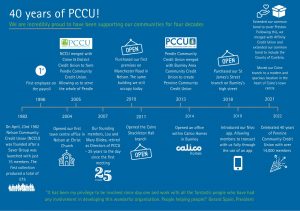