The evening was hosted by Chair of the All Parliamentary Group on Credit Unions, Bim Afolami MP, and addressed by Economic Secretary to the Treasury, John Glen MP, Minister for Pensions & Financial Inclusion, Guy Opperman MP and Managing Director of Halifax Bank, Russell Galley.

PCCU are proud to be self-sufficient, however with the rapid sustainable growth means that the Credit Union needs to increase financial reserves to comply with regulatory requirements. With PCCU being awarded the £50,000 grant from the Lloyds Banking Group funding this allows us to put the grant into PCCU’s reserves. 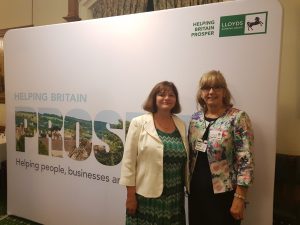 It was a pleasure to meet representatives from the Lloyds Banking Group to discuss how the awards have helped PCCU develop in Burnley town centre and provide some of the extra regulatory reserves necessary for future growth.
Thank you to Julie Cooper MP for Burnley who welcomed me to the meeting, showing her continued support for PCCU

PCCU would like to thank the Lloyds Banking Group for supporting the Credit Union sector and personally helping PCCU over the past 2 years. With the help from the Lloyds Banking Group Credit Union Development funding grant we have been able to purchase and renovate new premises in Burnley, we have grown our partnership with Spacious Place Furnishings and we have been able to strengthen our reserves. This enables us to provide increased access to ethical savings and affordable loans to people in the Burnley and Pendle communities.