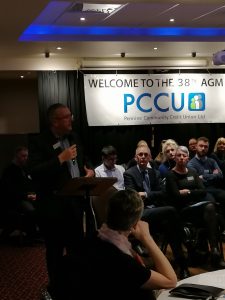 Family Loan and Saving Scheme which has allowed us to service a selection of the community which we previously was unable to serve.

This has contributed hugely to the 35% growth of our loan book, in just one financial year, paired with a 36% increase in membership.

To reiterate the financial achievements of PCCU year please see the below key figures:

As PCCU is a not-for-profit financial cooperative owned by our members the profits attained will be paid in the form of dividend to members.

This has contributed hugely to the growth of our loan book and the 36% increase in membership. Mr. Spain continued to speak highly of a further new saving product, the Fixed Term Deposit Account,

This offers a very competitive return of 2% AER on deposits between £5K and £85K.” This saving product was launched in January and account holders have already deposited over £2 Million.

The Credit Union membership agreed a dividend rate of 1% for both adult and junior dividend in addition to 2% adult loan interest rebate. It was recognised to be well above the average of 0.4% on easy access savings accounts.

Two charitable donation of £500 were dedicated to both Fiona and Dave King, representatives for BK’s Heroes and David Thomas, representative from League of Voluntary Workers at Burnley General Hospital. Both organisation expressed their gratitude for the donations to their incredible charities.

BK’s Heroes endeavours to find a cure for Brain Cancer and Kidney Disease, in memory of their son Ben King, the money contributed will be dedicated to research and helping support families on a similar journey. The ethos of PCCU was given recognition by Dave King, Ben’s Farther 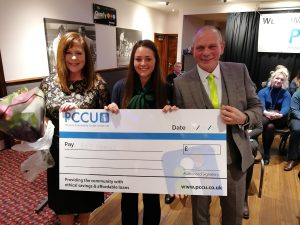 Thanks PCCU for having a great social connection within the community, Ben was born in this community and the charity was formed here, being run by local volunteers and family members.

for doing such a fantastic job in the community, you have my full support.

David explained the charitable donation made will be used to support staff and patients of Burnley General Hospital, by providing equipment and luxuries that the Health department’s budget cannot stretch to.

Account holders heard a speech by Antony Higginbotham, Member of Parliament for Burnley. Whereby he shared that this was the first AGM he had attended as a MP. He shared that 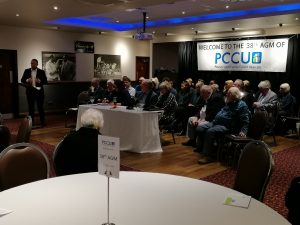 The growth of the Credit Union is a testament to the dedication of the staff and Board of PCCU.

The evening concluded with a speech from Robert Kelly, CEO of ABCUL our governing body, he informed account holders of PCCU that

The recent ABCUL Town hall consultations had four themes; Sustainability, Relevance, Collaboration and Purpose. I can tell you that

PCCU is all of these

Robert then gave his appreciation for the time and friendship PCCU gives to the Credit Union movement. 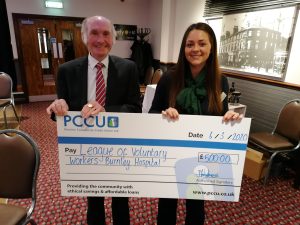