A huge congratulations is in order as Martyna graduates at the ABCUL’s annual conference.

This year one of PCCU’s very own, Martyna Styzinska, graduated from the CU Futures programme at the annual Association of British Credit Unions conference, held at The Midland Hotel in Manchester in March.

The ABCUL conference is the biggest event in the Credit Union calendar, which hosts 350 individuals, representing over 70% of credit unions across Great Britain. Not only did Martyna have the chance to Graduate at the event, she also was given the amazing opportunity to be part of the opening ceremony of the ABCUL AGM whereby she read the Credit Union Invocation prayer.

This prayer has been a staple part of the itinerary for many years, although, during the AGM that followed Credit Unions voted to remove the Invocation prayer to replace it with something more inclusive. It was a great honour for Martyna to represent PCCU and read this for the final time.

The CU Futures programme that Martyna completed over the last 12 months combines an industry standard qualification with personal development, on the job learning, and networking at a series of high profile events – all giving meaningful development support to future Credit Union leaders. The program is highly recognised for its innovative impact in supporting and developing young people across the British Credit Union movement.

Martyna speaks incredibly highly of her time on the programme and said her favourite part was hard to choose, although she had to say it was

Traveling to Dublin to learn about how other Credit Unions work and operate over there. It was so much fun seeing how similar and different we are compared to them. I learned so much from that trip.

Observing and understanding how other Credit Unions operate helps to contribute hugely to the way PCCU operates strategically. Therefore, Martyna’s learning gained from her travels is extremely valuable.

The eagerly awaited graduation ceremony was the highlight of the Saturday evening for many PCCU staff members. Witnessing Martyna graduating provided a great source of pride for both the Board of Directors and staff of PCCU, as all were aware of the hard work she’s put in this year.

One thing I know for sure is that I will carry on putting myself out there and saying yes to more things and any opportunities that come up in the future. I love learning new things and wherever I go I always bring back something to my Credit Union. I also love being part of the Credit Union world and I see myself working here for a long time as it’s one of the most rewarding jobs.

We see a bright future in Martyna as an upcoming Credit Union leader – Huge congratulations for your fantastic achievement! 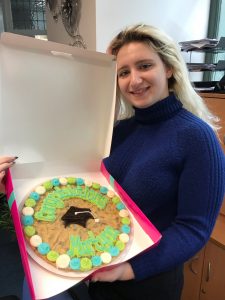