Colne & District Credit Union founder member David Penney and treasurer Karen Pashley officially opened the new Colne branch and gave speeches alongside Pendle MP Andrew Stephenson. Assembled guests were welcomed by PCCU President Gerard Spain, who along with other dignitaries, board members and staff celebrated the growth of the credit union and toasted the future at the newly built Peter Birtwistle House branch. 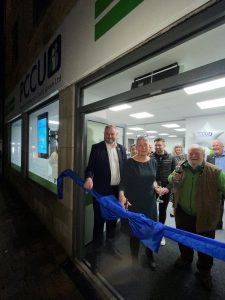 Gerard provided a timeline of the credit union’s development and explained how the branch located at 25 Market Street will provide a headquarters for the expanding digital team, running the 24/7 online accounts and secure Nivo app but it will also provide a hub in the centre of the community for account holders to visit

Welcome to this wonderful new branch, especially to Colne Credit Union’s founder members David and Ann-Marie. As a numbers-man I look to the figures that chart our development, it’s amazing to look back that when we opened the Christchurch branch in 2004, our first branch away from St George’s where we started Nelson Credit Union in 1982 – we held £1m in assets. We purchased our first branch in Nelson 2010 and hit £2m in assets. After the merger with Burnley Area Credit Union we opened the Calico Burnley branch in 2013 – hitting £3m in assets. 5 years later we were really proud to purchase, renovate and open the St James’s St Burnley branch in 2018 – with assets totaling £7m. As we open this much needed bigger branch today, PCCU has £15m in assets which is phenomenal!

PCCU is fortunate to still have a number of founder members of the Colne & District Credit Union on its current Board of Directors. David Penny shared the history of the credit union in Colne and expressed with humour how fantastic it is that the credit union continues to develop in order to benefit the community

We started the Colne Credit Union as a working group in 1996, it took almost 3 years to get from an idea to an actual credit union. We operated in any space that would have us, from the basement of TSB banks, to the unsuitable Holker Business Centre on the edge of the town and stints in places such as the charity Open Door. The drive was there but we were unsustainable and grateful in 2005 when Nelson Credit Union agreed to a merger. The way this credit union has developed is astonishing; the number of members, the savings we hold and loans, now serving not just Pendle and Burnley but many places across East Lancashire and now Cumbria. The board and staff provide a professional service to the community

Karen Pashley, current PCCU board member, passionately outlined her involvement with the credit union, stepping into replace the former Colne & District Credit Union treasurer just as the organsiation was given permission to operate in 1999 and highlighted the qualities that have allowed PCCU to grow 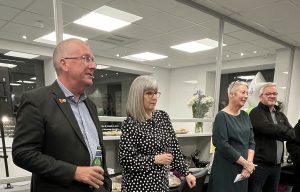 I’m really proud to be part of this organisation, this credit union tries. When the board are presented with challenges or issues – we try to forge the best path, we discuss and work through them. The management and staff team regularly encounter fresh challenges – and they try, and try to solve them and improve the credit union. The reason we try, and try, is because we want the best for the members and the communities we serve. I am proud of this organisation because it never sits back, happy at the position we are in but tries to move forward. It was pleasing when PCCU opened the Shackleton Hall branch, it was a commitment to the town and now to open in a prominent position is excellent.